JUDY WOODRUFF: Syria is entering its 10th year as a multifront battlefield. Civilians seek refuge from the brutal regime of Bashar al-Assad. And a residual U.S. force remains in the Northeast, guarding against the return of ISIS. For years, the U.S.' closest partner in that effort was a group of Syrian Kurds, an ethnic minority who also fought Assad. Amna Nawaz talks to an author whose new book spotlights a unique part of that fight.

AMNA NAWAZ: In the years-long battle to retake Northeastern Syria from ISIS, a small, but powerful band of fighters led the way, the women of the YPJ, a Syrian Kurdish force. They fought alongside their male counterparts and face to face against ISIS. Author and journalist Gayle Tzemach Lemmon spent years reporting on their stories, including for the "PBS NewsHour." Her new book, "Daughters of Kobani," tells those stories. And Gayle joins me now. Gayle, welcome back to the "NewsHour." Always good to see you. Congratulations on the book. And tell us about the Daughters of Kobani. How did you first hear about them? And what made you want to tell their story?

GAYLE TZEMACH LEMMON, Author, "The Daughters of Kobani: A Story of Rebellion, Courage, and Justice": Oh, thank you. Great to be here. I first heard about them because one of the U.S. special operations soldiers who was part of the book I had written "Ashley's War" called me from Syria in the summer of 2016. And she said: "Gayle, you have to come. I'm working in Syria with this partner force where women are leading in battle. And they're not just leading men, but they also have the full respect of the men they fight with. And the U.S. special operations soldiers have just enormous respect." And she said: "And not only that. It's not just that they're fighting against ISIS. They're fighting for women's equality."

AMNA NAWAZ: And one of those women you tell us about is a woman named Klara. You meet her in Raqqa. Here, actually, is a part from one of your reports for the "PBS NewsHour" from back in August of 2017.

GAYLE TZEMACH LEMMON: She is part of the Kurds' own all-women fighting force, known in Kurdish as the YPJ. They have fought and died right alongside their brothers-in-arms. And some of the most celebrated fighters, including snipers, come from their ranks. She took us to Raqqa's front line, to the site of a still-smoking ISIS car bomb attack.

KLARA, YPJ (through interpreter): They know they are surrounded and can't survive.

GAYLE TZEMACH LEMMON: Her forces, she says, draw strength from the unique and turbulent history of the Kurdish people.

KLARA (through interpreter): It's revenge for the atrocities and injustices that the Kurds suffered in the past.

AMNA NAWAZ: Gayle, what is it that made women like Klara want to take up arms and organize and fight against ISIS in the first place? 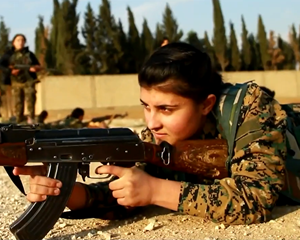 GAYLE TZEMACH LEMMON: These were women who originally took up arms to protect their neighborhoods in the chaos of the Syrian civil war. They were just trying to protect their towns and their neighborhoods and their homes from outsiders, right, and to protect the self-governance experiment they had built that had women's equality right at the center of what they were building. Then comes ISIS, and this showdown truly that you could not invent if you tried between the men who bought and sold women as central to their ideology, the men of the Islamic State, who come to the town of Kobani, and they face off against this little force at a time when ISIS had never lost that kept standing up to it. And this force really had women's emancipation and women's equality right at the heart of who they were. And then the Americans come in and catapult this force onto the global stage, and they together hand ISIS its first loss.

AMNA NAWAZ: You mentioned, of course, that work they did alongside U.S. Special Forces, but they are not without controversy, right? I mean, their fighting force, the YPJ, is fighting terrorists in the form of ISIS, but they're also affiliated with another group, the PKK, that the U.S. and Turkey and others consider to be terrorists. So what was that relationship like with U.S. forces?

GAYLE TZEMACH LEMMON: And the relationship is actually one of deep trust and respect. And the U.S. has -- and, really, the story has to go into this and does go into this for readers -- this policy tightrope that the Americans have walked, which said the Syrian Kurds are different than the PKK, from which they are an offshoot. And they have said: We chose this Syrian partner because they are the best hope we have in fighting and holding terrain from the Islamic State.

AMNA NAWAZ: Gayle, these women, of course, their Kurdish goals were kind of brought into alignment with U.S. goals in the fight against ISIS, but we all know, after then, a lot of those Syrian Kurdish forces were kind of left to their own. Having defeated ISIS, they then had to face a Turkish invasion without U.S. support. What does that mean for all these women? Where are they now?

GAYLE TZEMACH LEMMON: So, I often joke I have much more hope in Northeastern Syria than in Northwest Washington, because, regardless of the setback, they continue to push forward. I was in Northeastern Syria maybe about six weeks after the Turkish-backed incursion. And what stunned me, actually, was how much of what they have built and this experiment in women's equality that still stands. In all the towns they took from ISIS, except for two that are now occupied by Turkish-backed forces, they have women co-heading every council. They have women's councils in every town there. So, they continue to have women right at the center of their experiment in grassroots participatory democracy that's aimed at self-rule.

AMNA NAWAZ: Fascinating stories of women on the front lines there, now being developed, I understand, into a miniseries coming to an even broader audience. The book is "The Daughters of Kobani." The author is Gayle Tzemach Lemmon. Thank you so much, Gayle. Good to see you.